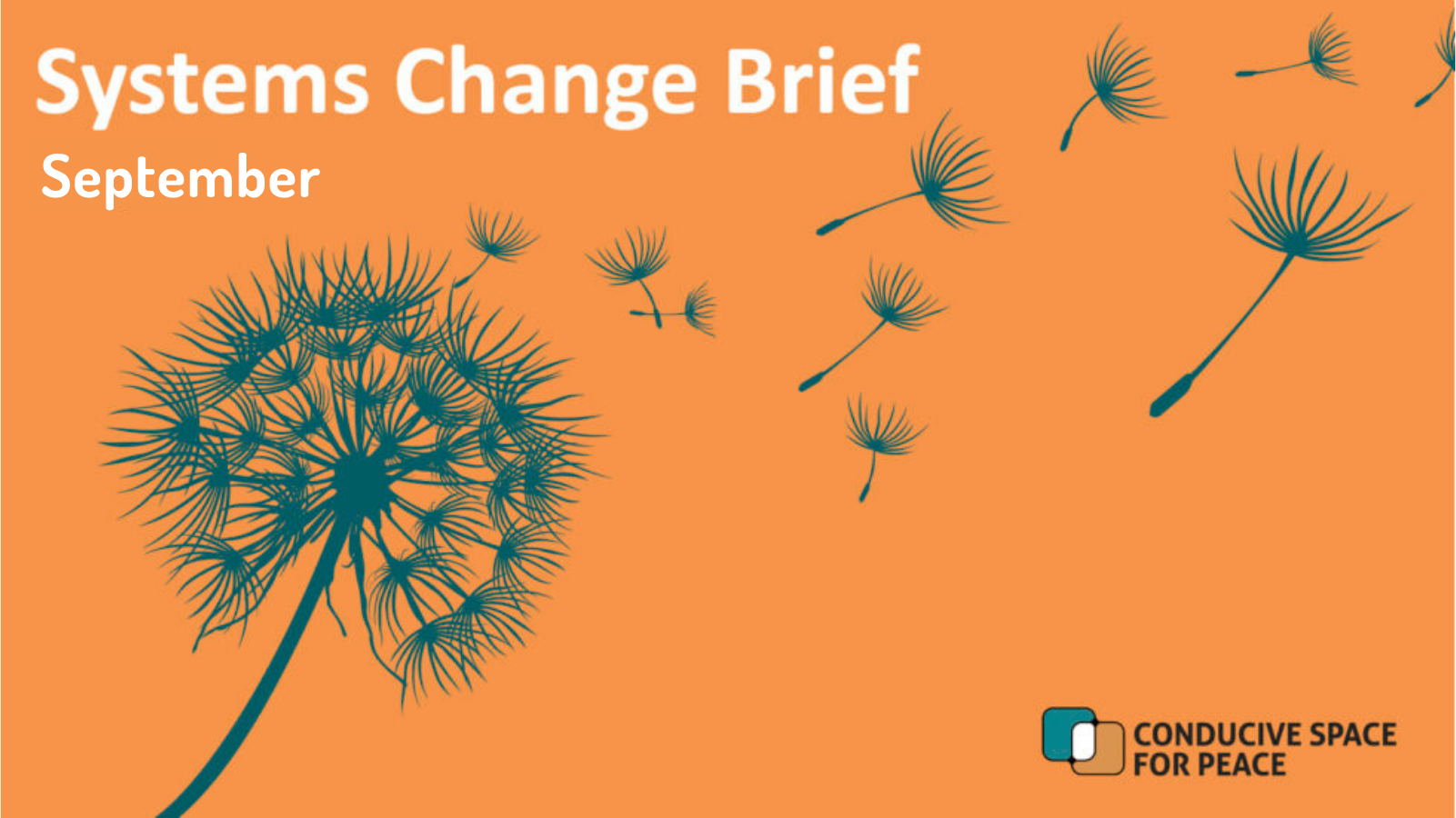 In an effort to expand the community of like-minded peers interested in systems change for locally-led peacebuilding and development, Conducive Space for Peace produces a monthly systems change brief. Check out the latest September brief by CSP Director Mie Roesdahl.

Conducive Space for Peace was created with the aim of being bold and thinking differently about shifting power to local peacebuilders. We hope our upcoming briefs will spark your interest and expand the space for us all as we continue to collectively explore and pursue pathways of systems change for locally-led peacebuilding. We invite you to sign up today should you wish to begin receiving our upcoming briefs as well.

I’m writing to you because you signed up to receive regular ‘briefs’ from Conducive Space for Peace (CSP) on the theme of transforming the global peacebuilding and development system and shifting power to local actors. This means you are a change agent. You have chosen to stand with others in exploring systems change that decolonise the aid and peacebuilding sector. Thus, we move beyond stating the obvious – how the system is dysfunctional, and how power inequalities between international and local actors are undermining the space for local peacebuilders to unfold their potential. For a deeper dive into these issues, you may want to look to our other publications such as A Global System in Flux.

I feel humbled by this endeavour of sharing reflections on systems change among this community of change agents. The first brief I shared, two months ago, elicited many valuable exchanges and conversations. I became wiser through these conversations and I think others did too. And while this space is only one of multiple sources of reflection and sharing in these times of change, it may not lessen its value. As I argued in the last Systems Change Brief in July, it is the multitude of voices that give strengths to the movement for change. It is like the log I just added to the fireplace to sustain the fire in this small cottage at the West Coast of Denmark where I’m currently sheltering from the rain. The log and the fire are inviting others to come sit around the fireplace before we all move on, with warmth in our bodies, to the reality of an often technocratic, hierarchical and power-driven system.

It is this relation, between the human potential, dignity and moral compass on the one hand and the technocratic, self-perpetuating, and effectiveness-driven system on the other hand, that I wish to ponder on in this brief.

People vs institutions – a false dichotomy

Let me first clarify that I do not see systems and human beings – or institutions and people – as two separate things. Even big institutions like the UN agencies, bilateral donors and international NGOs consist of people. There would be no institutions without people. And systems, as we know from among others Rob Ricigliano (Making Peace Last), are made up of structures, practices, and attitudes/culture – and systems change requires change at all these levels. It requires people to change systems, and a large part of systems change happens within the people themselves and in their way of influencing institutional culture and structure through their own practices, attitudes, and norms.

Therefore, we are not faced with a question of whether systems change is about institutions or people. But because institutional change within the ‘aid system’ is so often considered a matter of policy and procedural change, CSP makes a deliberate stand to take a people-centred lens on systems change efforts. You may also argue that this is a reflection of the times: the pendulum has for a while lingered (in apathy or suspense?) at the far end of a scale that holds technocracy, procedures, rules at one of its poles, and seems now to move toward the centre and in reach of a revival of the importance of human connectivity, dignity and ethics at the other end of the scale. If we seek to reduce the gap between the technocratic approach and the more human-centered and value-based approach to change we should aspire to ‘humanise’ our procedures and protocols and build our organisations and their ‘standard operating procedures’ on the basis of human ethics above organisational compliance.

We are standing at the doorstep or portal to a new era, where we must choose to re-create space for the human potential and dignity to unfold into the very core of institutions.

Instrumental vs ethical reasons for change

People working within international institutions that hold an intention to support people in their aspirations for change in conflict affected contexts can be important change agents to shift power to local actors and ‘decolonise aid’. Change agents within institutions hold insights of the dysfunctionalities of these institutions and understand how they may be able to change. But change agents are very diverse and have different entry points to change.

Some are motivated by the fact that if power is shifted to local actors, the system will be more effective and efficient in building peace. This motivation is instrumental. Others are motivated by the realisation that the current ways of working of the aid system and the power inequalities embedded therein are not aligned with their values and ethics. This motivation is based on values and ethics and carries the notion of what it means to be a dignified human being. In the latter case, changing the ways of working including one’s own practices is a goal in and of itself. Most often these two types of motivations go together in different constellations, however the instrumental logic is currently predominant in the peace and development system. How often do we hear arguments for inclusion of women in peace processes because it will make peace agreements more sustainable? Even the abolition of slavery in the US was infused with instrumental reasoning. Abraham Lincoln was quoted for not essentially seeking the abolition of slavery with the aim of addressing inequality but in order to reach a political compromise between the North and the South. If correct, one can argue that his motivation for change was instrumental in terms of his own interests and those of his party rather than serving a greater aim of equality. It gave rise to an important milestone in addressing inequality and racism in the US, and yet it did not transform the practices and attitudes that lie at the heart of inequality and racism.

While complementarity between different change agents holding different reasons for change indeed is possible, it is not sufficient to approach the need to transform the system to shift power to local peacebuilders from an instrumental point of view. If the change we seek in the current peace and development system is justified purely through an effectiveness lens – making the system better at supporting local peacebuilders – it neither recognises historical exclusion and marginalisation of local peacebuilders in the aid system, nor the broader need and aspiration for equality and dignity. The instrumental approach is likely to result in incremental systems changes rather than broader systems transformation.

Implications of an ethical stand on change

It is much harder for those involved to pursue change from an ethical perspective. Like many others, I have recognised that things were not working as they should, and that my actions as an international peacebuilder and donor representative (in previous positions) were not aligning with my values of equity and dignity. I was complicit in the dysfunctionalities of the system as I continued to follow the standard rules of the system. Susanna Campbell has talked about the need for rule-breakers. Her focus has been on country-based international staff, and their role in ensuring local accountability by breaching the predominant ‘rule’ of accountability applying primarily to donors. How much effort is currently going into reporting against donor priorities as opposed to being accountable to local priorities?

It is difficult to contain being part of a system that does not align with the values one holds. But this is where the potential for change lies. The fact that we have become aware of the misalignment with our values is an important stepping-stone for change. Various philosophers have pondered upon the ability of human beings to navigate between notions of having full control over one’s life (from individualism to radical existentialism) and being controlled by predetermined conditions (from Habitus to destiny thinking). On a continuum between these poles, most will argue that human beings have more power to shape our lives and the conditions around them if they have a strong awareness of their values and a moral compass that indicates when actions are off track. The moral compass may be slightly out of tune when the majority of international institutions are operating as if there are no alternatives to international actors enjoying privileges, setting priorities, and making decisions that restrict the space for local peacebuilders to pursue their vision for change. So, we need to sharpen our moral compass.

Walking the Talk in Conducive Space for Peace

In Conducive Space for Peace, we have an ongoing focus on Walking the Talk and aligning with our values of equity, dignity, and integrity. Almost every day, questions come up that demand an active decision to do something differently than what the system expects of us.

If we for example organize a session in a conference or workshop, how do we ensure that all are able to participate on equal terms and are recognised equally for their contribution? This issue may show up in disguises such as lack of compensation to local peacebuilders for their participation although internationals have a salary that covers their time, lack of space (or attention) to include all logos of participating organisations and not only the internationals, lack of access of local peacebuilders to be a member of or participant in the networks that convene meetings, tokenistic inclusion of local actors, etc.

And how do we ensure alignment with our values in our internal ways of working; in decision-making, governance, collaboration, salary structure, work environment, etc. All this takes time, and it doesn’t necessarily leave us feeling better about our own role, as it sharpens our continuous discovering of new areas that need attention in order for us to align with our values. We are keen to share experiences with others who are travelling on similar journeys; to learn from one another, and to broaden the platform from which we can have a conversation about broader change in the sector. Linking internal change processes (internal to people and to organisations) with a network of change agents and organisations holding a collective aspiration for change is one of the important pillars in our understanding of how broader transformational change can happen.

The Dandelion approach to collectively grow and learn as a network

It would be great to hear from you, if any of these ponderings sparked your reflection on these important issues. Only through all of us putting our minds and hearts together can we hope to facilitate change.

Also, I would urge you to also share your thoughts on how we address the dysfunctionalities of the aid system, decolonise aid, shift power to local peacebuilders, and address the technocratic obstacles and disincentives for change. And share with everyone you can, including the sign-up link with colleagues and friends who may be interested in this conversation. Spread the thoughts on change like a dandelion whose seeds blow into the wind and find even the smallest crack in a tarmac road or other hostile environment and take root. That’s the beginning of a movement for change.

Sign up to CSP’s monthly systems change briefs and join our movement of likeminded change agents coming together to explore how to pursue systems change for locally-led peacebuilding.